Sharing the experience of successfully installing Ubuntu on the Dell Inspiron and lessons learned. First out the box setup the Dell and let it complete the Windows 10 installation (assuming you want to dual boot both as I have done). 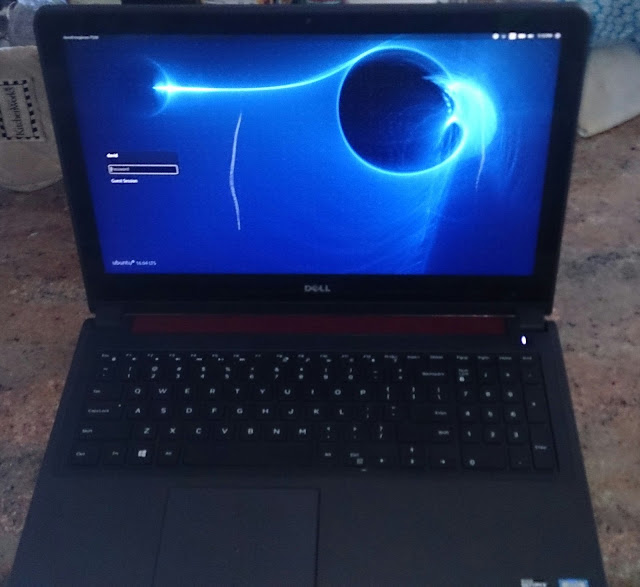 While that is happening prepare your install USB stick for Ubuntu 16.04 LTS. Just as a note, I tried using Ubuntu 17.04 but had issues with the desktop locking up. Unity8 briefly worked but then it too froze. So I reverted back to 16.04 as the default. I suspect you can get 17.04 running if you put on the server version, and then manually install the desktop and configure the graphics and so forth and want to spend the extra time in resolving things.

Once the Windows 10 is complete (allow several hours for that) then you need to do 2 steps. First run the Windows disk defragment utility to compress down the file system. Then run the disk manager utility and shrink down the partition. I was able to shrink it to 250GB, leaving 760GB for installing Ubuntu.

Then with the Ubuntu boot USB inserted reboot and press F12 key and pick the USB boot. Choose the install Ubuntu option and the dual boot with Windows. Next connect to your network and proceed. Do not check the box that installs Third Party software, leave that out, it will interfere with the boot manager and you can manually add what you need once Ubuntu is installed.

Proceed to install Ubuntu and boot and log in.

Now you need to do these steps.

First thing you will notice is that desktop items are really tiny. Click on the Ubuntu settings "gear wheel and spanner" icon. Pick 'Appearance' and set the Icon size to 64. Then return to All Settings and pick Display, and set the Scale for Menu and Title bars to 1.5 - now you should be good and can read things.

Second install the latest LINUX kernel, start by opening a terminal session (Ctrl+Alt+T) and create a temporary folder to get the components into by entering the following:
cd /tmp
mkdir kernel
cd /kernel

Reboot, and what will happen is the shutdown will freeze with scrolling messages in text mode displayed. Just hard power off at that point holding the power switch down until it switches off. We are going to fix that last.

Once you are logged back into Ubuntu, in the launcher pick the Additional Drivers app. It will show you that NVidia and Micro code are missing.

To install those follow the instructions in this page for switching the graphics drivers and adding the micro code.

Reset your graphics again as in step 1.

Now we are ready to disable the Nouveau driver following these instructions (note; use gedit instead of the vim editor).

Reboot and that should be it. Your new shiny Ubuntu is ready to roll with smooth booting and shutdown and optimized GeForce GTX graphics.

Also you will notice that the touch screen functionality works for page scrolling and selecting text and menu options, which is a nice bonus.

To round things out enhance the audio ALSA support and Bluetooth control. For the audio install the Pulse audio equalizer and then from the Ubuntu Software center install the "Blue Man" Bluetooth Manager app.  For more ideas see this Ubuntu handy list of things to install and configure plus these 38 ideas.

For comparison I ran the Geekbench 4 benchmarking from the terminal to ensure everything is running optimally with 8GB of memory installed. I then installed an additional 8GB to make 16GB total and reran, the result is noticeably better, so you may want to consider adding that extra memory; see the second image below. 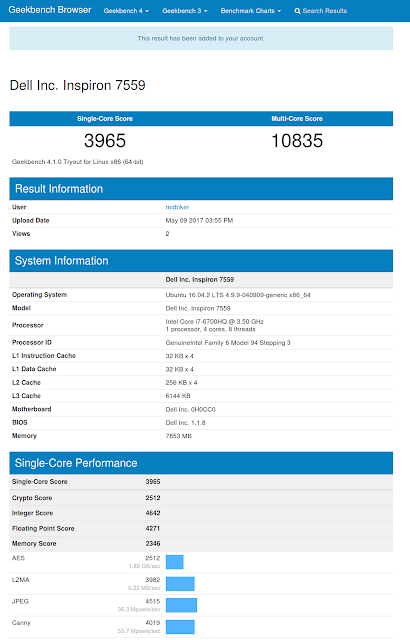 And this is the Geekbench result for 16GB of memory installed which also tops the Multicore results for 16GB 7559 Inspirons on Geekbench overall. Kudos to Ubuntu 16.04 performance. 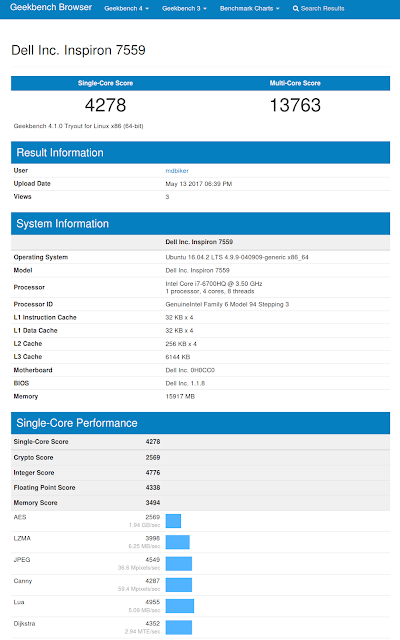 Going one better, I then installed a Samsung 250GB SSD and repeated all of the above to boot from the SSD (note: use the "Do something else" option in the Ubuntu installer - and manually configure the SSD swap space and root partition - see install 16.04 example here).

This gave a slightly better benchmark result as here. 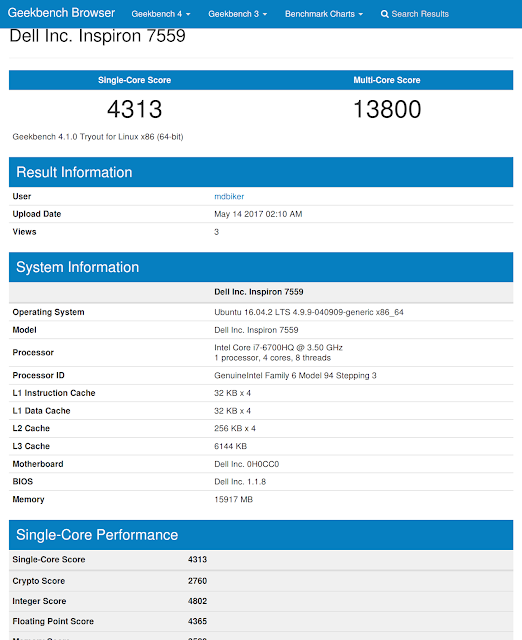